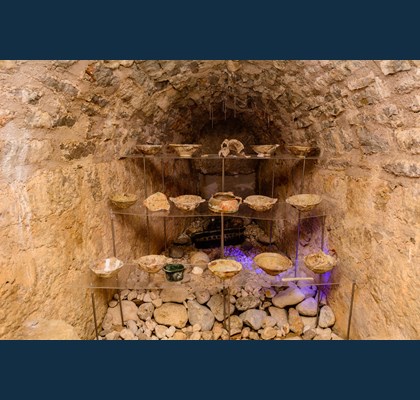 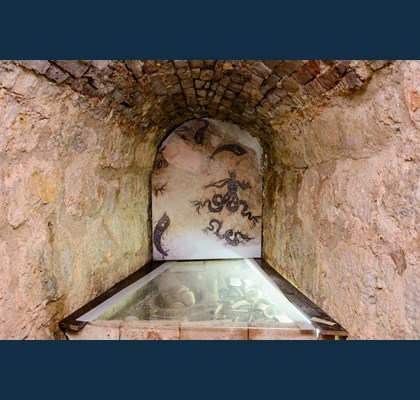 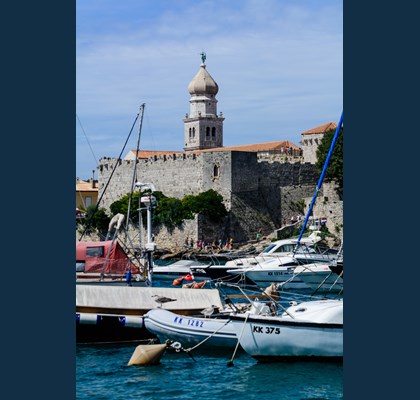 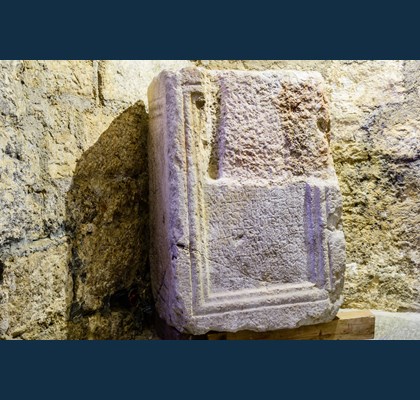 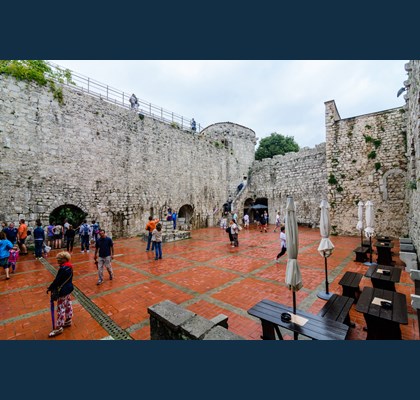 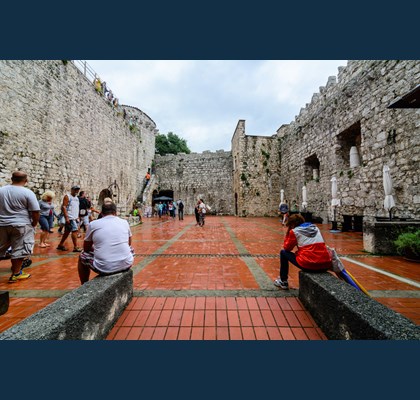 
On the square Kamplin, opposite of the Krk cathedral, near the bishop’s palace, there is the old Frankopan castle. It was the central and final line of city defence. It was made during several construction operations, from the 12th until the end of the 18th century. The oldest architectural element of the castle is the square tower – Frankopan tower and a court. It is known that the tower was completed in 1191, as this is witnessed by the Latin inscription in the semi-lunette above the door, which says: (H)oc opus e(st) to(t)i(u)s h(uius) comunis+a(nno) d(omi)ni m(illesimo) c(entisimo) no(n)a(gesi)mo I (primo) t(em)po(r)e I(ohannis) Vegl(ensi)s e(pisco)pi et B(artholomei) ac W(idonis) co(mit)v(m) V(egle) (h)oc opus e(st) i(n)ceptu(m) (This is the work of the entire community + (cross) the construction began in the year of our Lord 1191, at the time of John, bishop of Krk, and Bartul and Vid, dukes of Krk).
The inscription explicitly mentions the participants and the time of its construction, but there is nothing about its function or purpose. The tower distinguishes itself from other architectural components of the castle with the manner of its construction and the way of building large carved stone blocks, which reminds of the neighbouring Romanesque church of St Kvirin. It is precisely because of this difference that there is a theory about its possible independent existence in the period before the castle was built.
Today’s bell tower of the Krk cathedral represents a more recent construction style from the 16th century, which poses the question of existence and location of the older Romanesque bell tower. In the Romanesque style, the tower was a necessity, especially when we compare other diocesan centres like Rab or Zadar, where the bell towers appeared alongside the cathedrals around the 12th-13th centuries. The polyptych of Santacroce, kept at the Franciscan monastery on the isle Košljun, St Kvirin is holding the town map in his arms, where we can clearly see the Krk castle, and on the place of today’s tower – court room, there is a tall structure similar to a bell tower. The architectural characteristics of the tower itself speak in favour of this theory. It is made of regular carved stones, with the walls reaching almost 2 metres in some places, which shows that the structure was meant to be vertical. Besides that, there are remains of a fresco painting of religious topic in the ground floor, which indicates its sacral purpose. All of this leads to the conclusion that the so called court room tower, as it is called today, was actually a bell tower by its original purpose. During centuries and historical circumstances, its original sacral function disappeared and it was assimilated into the castle complex as a tower.
The wall connects the south-eastern tower of the castle, so called “Austrian tower”, to the remains of the tower above the gate Pizanska Vrata. Considering the construction technique and certain stylistic elements, its construction may be dated into the 14th century.
There are views according to which the walls enclosing the castle, and the upper floor of the tower were built in the Romanesque period because of the shape of stone consoles, which can still be seen today. Such early dating is very controversial, according to our opinion this part of the wall emerged in the 15th century. Such construction is characteristic for later periods, so even the general Contarini was an aspirant for the castle reconstruction in 1559, according to the report by the provveditore Angelo Gradonica.
The round “Venetian” tower on Kamplin has been altered several times. Towards the square Kamplin, on the external side of the so called “Venetian” tower, there is a stone plate with the inscription “Aurea Venetorum Libertati” and the symbol of St Marco. Conical canon openings can be seen in the ground floor of the “Venetian” tower. Two openings are authentic, and the eastern loop-hole, overlooking the gate Pizanska Vrata, was built later, at the time when the original tower gate, the main entrance to the castle, was walled in. The door was built with regular carved stones with an iron pole which was lowered through a groove from the first floor. Such construction and the mechanism of opening and closing the door indicate a different, symmetrical shape of the tower than it is today. This hypothesis certainly needs to be scientifically verified through research in the conical cover of the tower which could have subsequently enclosed the walls of the older structure, which probably had a rectangular layout.
The Frankopan castle represents the only remaining profane monument of the Middle Ages in the city of Krk. The castle was reconstructed, a promenade was opened on a part of the wall and a smaller exhibition of archaeological monuments was made. Summer cultural manifestations are traditionally held within the castle walls.