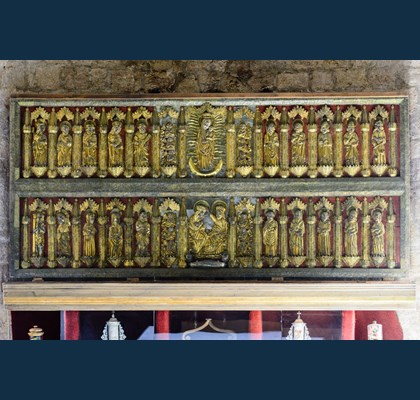 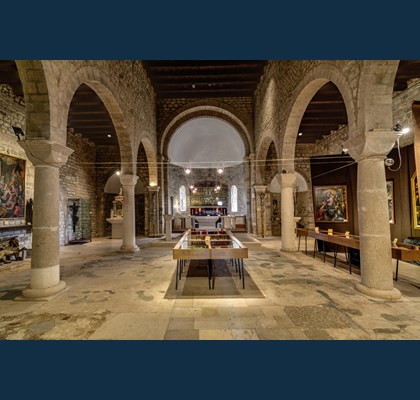 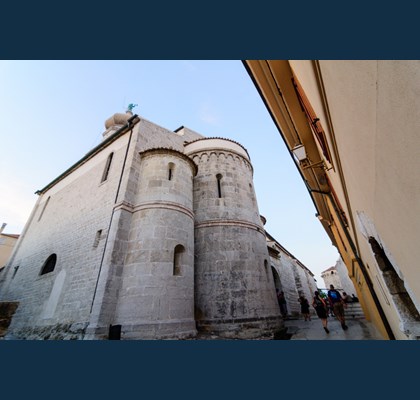 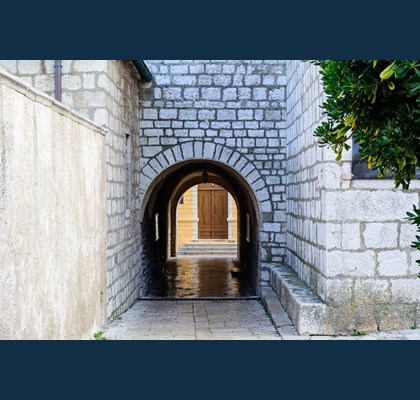 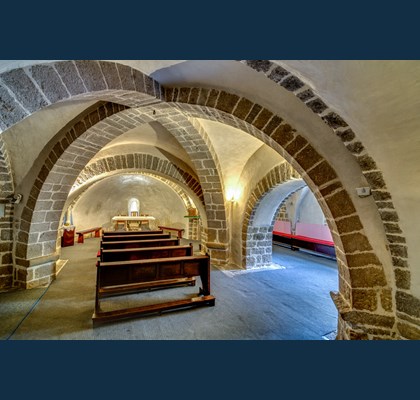 
The church of St Kvirin, dedicated to the patron saint of the City of Krk, is a beautiful example of the Romanesque sacral architecture in the city of Krk. Today it forms a part of the entire cathedral complex. The first information about St Kvirin originate from 1335, when the people of Krk gave the money from the rent for the isle of Plavnik to “repair the church of St Kvirin in Krk”. It is supposed that the church was built in the 12th century. It is different because of its two levels and its geographical orientation, as its apse is quite untypically directed towards the south, probably owing to the restricted space in which it was built. The lower part bears the name of St Margaret, the martyr saint from Antakya, while the upper level is dedicated to St Kvirin, the patron saint of the city of Krk. The interior of the upper and lower levels is quite different; the lower level has two naves, the eastern nave being wider than the western, while the upper level has three naves. This difference is determined by the three-apse southern end on the upper level and the two apses on the ground floor. In the ground floor eastern apse, the wall is reduced and a passage was made towards the cathedral and the church of St Margaret. This Romanesque church was built from the local white stone. The three-apse semi-cylindrical ends, uneven on the eastern and on the western side, especially contribute to the church’s aesthetics. Besides the deep window openings, their only pronounced decoration consists of a blind Romanesque arcade on the top and the edging made of reddish local stone (called mandorlat) in the middle.
At the beginning, St Kvirin and the Cathedral were not connected. It is known that in 1290, bishop Lambert obtained the pope’s permission to collect alms to perform some very expensive works on the Cathedral, after which, it is supposed that the Cathedral was joined to the St Kvirin. Originally, the churches were joined so that the upper church had a large opening, extending almost along the entire length of the central cathedral nave. By such joining, the upper church became the cathedral’s matroneum, where the women used to stand during mass in the Cathedral. After the church organ was placed in the Cathedral, the opening between the two edifices was entirely closed, leaving just one door. Still, there is a possibility that St Kvirin was a palatine chapel of the Krk bishop or a western structure (westwerk gallery) from where the Krk princes followed mass.
Even in the old statutes of Krk there is a regulation stating that during writing wills, the notaries had to ask the maker of the will if he wanted to leave something to the church of St Kvirin, the patron saint of Krk. Mass is still held today in the lower church, while the upper church (St Kvirin) was converted into a museum.