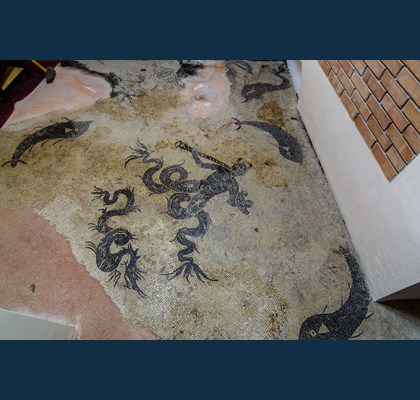 
Walking down the narrow street Ribarska Ulica from the Great Market towards the south, you will come across the café “Mate” which contains the mosaic floor with a rich illustration. According to its stylistic features, it was dated into the 1st century and is believed to have been the work of many masters. The mythological creature Triton, with a human body and a fish tail, dominates in the centre of the presented mosaic. It is a sea god, the son of Poseidon and Nereid Amphitrite. It is surrounded by figures of the sea fauna, dolphins and fish with stylized dragon-like characteristics. It is supposed that Triton is just one of four figures, two of which have partially been preserved, while the fourth one was destroyed by subsequent partitioning.
The mosaic decoration also shows the image of a wine container – kantaros. The container is held by another mythological creature, probably ichthyocentaur with a human torso, horse’s legs and a fish tail. As the mosaic is damaged, we can only see its mane and a trident in its left hand. The appearance of the character of the ichthyocentaur, representing a character by itself, just like Triton, shows that Triton is not the central figure of the illustration. The cheerful atmosphere and the content of the illustration indicate that this is a scene of a sea feast.
The third mythological being is also kept only in traces. This was probably Hermes’ son Pan. This is indicated by the image of the flute (syrinx), with which Pan contributes to the musical atmosphere of the feast.
After identifying three characters, Triton, Ichthyocentaur and Pan, completely equal in their presentation, standing approximately at the same distance one from the other, we get the impression that there is the fourth character missing, which would complete the appearance of the entire sea feast.
The mosaic was probably the floor of the thermae situated in a wealthy private building.