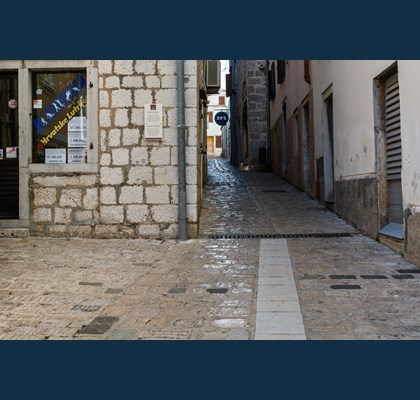 
Today this area is marked merely by a widening on the crossroads of main streets, however its old name suggests its ancient origin dating back to the Roman age.
This is the place where two main city streets cross. These streets are a reflection of history, of the Romanization of the city and partial continuity of Roman city building indicated through the order and symmetry. Romanization marked the end of autochthonous tradition of building prehistorical communities and conveying Roman urbanism achievements on the entire conquered area. Krk got caught up in the urban dose of the antique understanding of the city. The Romans came across the already defined settlement with all elements required to create a city and they shaped it according to their standards.
The Roman city is planned by orienting according to the coordinate system towards four cardinal directions, starting from its geometric centre – the bellybutton (umbilicus, omphalos) – which is located precisely on this square. From this point, the priest-planner facing towards east, with his arms spread out, determines the direction of the city cardo, the main communication in the direction north-south. The city abscissa passes through the same point, in the direction east-west. This is the city decumanus, or main street oriented east-west. These two main axes of the coordinate system into which the city is incorporated, divide the area into four city regions, reflections of sky quadrants: antica dextrata and antica sinistrata, postica dextrata and postica sinistrata.
By observing the layout of the city, there is a possibility that here, within the limits of the insula situated to the north of the city thermae, was the location of the antique forum, which disappeared in the later stages of reurbanisation, and turned into a small square. These are, however, only assumptions owing to insufficient archaeological study and compacted urbanism brought in the Middle Ages.
The position of the square on the intersection of the main streets, whose origin is undoubtedly in antiquity, may be related to the Vitruvius’ principles of city building, which dictate the location of the forum precisely on the junction of the main city streets. There are many such examples on the east Adriatic coast, e.g. Jader, Aequum, Aenona, etc.