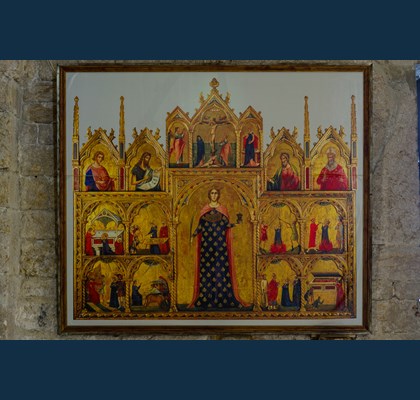 
The poylptych (altar painting consisting of more pieces) of St Lucia was made by Paolo Veneziano and his workshop. The altarpiece was made around 1340. Today it is situated in the museum collection of the church of St Kvirin, but its original place was the sanctuary of St Lucia in Jurandvor near Baška.
The central dominant piece, dimensions 78x47 cm, shows St Lucia, the early Christian martyr from the 4th century, as a crowned virgin with a palm in her hands. It is placed frontally, in a turquoise blue dress with decorative flowers. Above her, there are the crucified Christ with the Mother of God and St John, and the archangel Gabriel and the Lady of Annunciation, the images of faith into Christ. The crucified Christ shows a pronounced agonized painful appearance, a calm half-dead look on his face, while his followers show a silent stiffness under the green wall of Jerusalem, which is a common scene in the Byzantine painting. There are four saints to the left and right of the crucifix. These are Lucia’s holy followers, along the central fields there are St Andrew and St John the Baptist with general significance, and in the outer fields St Kvirin and St Gaudientius with local significance. These scenes witness that the art work was ordered by a local inhabitant, considering that St John the Baptist was the patron saint of the parish Baška, and there is a Romanesque church dedicated to him on the hill above the convent of St Lucia, St Andrew is the titular of the early Christian basilica found nearby, St Gaudientius was the most famous head of the Krk diocese and St Kvirin its first patron saint.
The images from the life of St Lucia, shown on the areas on the left and right side, are most interesting. The saint woman’s life is illustrated in chronological order. On the left, there are the following scenes: 1. Lucia kneeling in front of the grave of St Agatha praying for the health of her mother, 2. Lucia giving her dowry to the poor, 3. A man of faith incriminates Lucia to the prefect Paskacije for her publicly choosing Christianity, 4. Lucia is condemned to serve in a brothel and oxen drag her to evil, i.e. public house, without success.
On the right side of the saint woman, there are the following scenes: 5. Lucia is poured with oil and pitch at the stake, but the flames do not reach her, so she remains unharmed, 6. Paskacije pierces the saint woman with a dagger into her throat to kill her finally, 7. Unharmed saint woman prophesizes peace to the Church after the death of the pagan emperors Diocletian and Maximilian, and she receives the communion wafer, 8. the people of faith visit the grave of St Lucia.
The altarpiece has so far been subjected to many restoring works, which says a lot about its value. The first restoration was performed in 1912 in Vienna, then the polyptych was kept in the museum in Trieste until 1945, and after many difficulties it returned to Krk. Afterwards the polyptych was subjected to smaller interventions by Zagreb restorers for exhibitions, such as the exhibition Paolo Veneziano and his Circle in Zagreb in 1967.