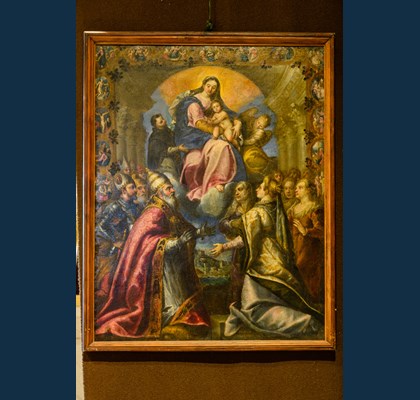 
The altarpiece was ordered as a decoration for the altar of the Lady of the Rosary in the Cathedral. It represents the Lady of the Rosary with St Dominic, the Pope Pio V and the queen of Cyprus. This painting, representing the victory of the Christian world in the sea battle near Lepanto in 1571, is relatively small. It is well known that the people of Krk also participated in the Battle of Lepanto. Their galley was called the “Uskrsli Krist” (Resurrected Christ), under the command of Ljudevit Cicut, whose grave is today situated in the cathedral. The Krk bishop Petar Bembo reported about the horrible circumstances on Krk at the time in his letter to the pope’s nuncio, complaining that there was no work force on the island because most of the men were either on the galley or were already dead.
The author of the painting is the Venetian master Andrea Vicentino, and it is dated around 1600. Vicentino is one of the representatives of the Venetian settemaniere-style of painting, originating from the great Venetian artists, Tizian, Tintoretto and Veronese.
Although this altarpiece is not one of Vicentino’s best art works and there is also a great possibility that is served only as a bozetto (template) for a larger altarpiece of the same theme and concept, it is a true example of the influence of the Venetian culture and art on the political and cultural movements in the area. Today the altarpiece is placed in the fund of the church of St Kvirin museum.